Written by Super User. Posted in Releases up to December 2014 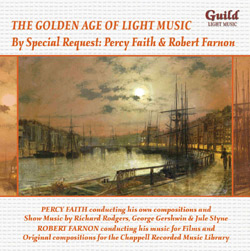 Canada’s largest city, Toronto, has the honour and distinction of being the birthplace of two of the 20th Century’s finest composer/conductor/arrangers in the world of Light Music. Ironically both of them achieved worldwide recognition and fame when they left their homeland and established their glittering careers in other countries. In the case of Percy Faith he responded to many offers of work and moved south of the border into the United States. Robert Farnon was sent to Britain during the Second World War, where he realised that the entertainment scene offered him more scope than back home to develop his skills. In each case they had been recognised in Canada for their music before they left, but it can be argued that they might not have achieved their universal acclaim had they not developed their careers elsewhere.

Percy Faith was born on 7 April 1908, the oldest of eight children. As a child he learned the violin and piano, and originally he expected that he would pursue his music career as a concert pianist. Aged only 15, he gave a piano recital at Toronto’s famous Massey Hall, but he injured his hands in a fire which forced him to turn to composing, arranging and conducting.

During the 1930s he was regularly heard in live music broadcasts on Canadian radio, and his programme "Music By Faith" was carried by the Mutual network in the USA, prompting offers of work south of the border. He eventually succumbed in 1940 and moved to Chicago, leaving Robert Farnon (previously his lead trumpeter) to conduct his Canadian orchestra. He became a naturalized citizen of the United States in 1945.

Initially Faith concentrated on broadcasting, although he did make some commercial recordings for the Majestic, Decca and RCA labels, several of which have featured on previous Guild CDs. However, many other recordings, mainly derived from his radio programmes, were issued by Voice Of America on transcription discs, but these were not available to the general public. Some of them may now be heard on Guild GLCD5174 and GLCD5181. Things were to change dramatically when he signed a Columbia (CBS) contract in 1950 to provide backings for the label’s top singers which also allowed him to begin a regular programme of recording singles and albums of his own.

He soon discovered that his singles sold well and the new long playing records needed the kind of popular instrumental sounds that had formed the basis of his broadcasts for so many years. Unlike many of his contemporaries, Faith arranged all his own material, and his exciting and vibrant scores made his work stand out among the rest. He accompanied Columbia’s contract singers, and even contributed the odd popular song, such as My Heart Cries For You for Guy Mitchell. One of his best-selling singles was Theme from "A Summer Place" (on Guild GLCD5165) which is still frequently heard today. It won the Grammy Award for ‘Record Of The Year’ in 1961. A second Grammy followed in 1969 for his album Love Theme from "Romeo and Juliet".

Percy Faith’s recordings usually concentrated on the rich source of popular music of the time, which was available in abundance in musicals on Broadway and Hollywood films. But he also had a penchant for the exotic sounds of Latin-American music, and some of his best-selling collections featured his distinctive arrangements of the music of Mexico and Brazil. Like his fellow orchestra leaders, he had to acknowledge the changing tastes in popular music during the 1960s, and for a while he managed to attract a younger generation of listeners with albums devoted to lush orchestral versions of current song successes.

Although his recording career was always paramount, his composing and arranging abilities naturally attracted offers of work elsewhere. He composed the popular theme music for the television series "The Virginian", screened by NBC in the US and also shown in many countries around the world. In Hollywood he received an Academy Award nomination for his arrangements of the songs in the Doris Day film "Love Me Or Leave Me" (1955). Other Hollywood commissions included "Tammy Tell Me True" (1961), "I’d Rather Be Rich" (1964), "The Love Goddesses" (1964) and "The Third Day" (1965). The following year he provided a beautiful score for the much criticised film "The Oscar", although it did produce the song Maybe September which was recorded by Tony Bennett.

But today it is his numerous albums that have created a resurgence of interest in his work, thanks to their reissue on CD. Faith was always busy, whether working in the recording studios, radio, television or films. He died at Encino, California, on 9 February 1976, aged 67.

Percy Faith’s music has already been widely represented on Guild Light Music CDs. Some of the most memorable tracks include:

Robert Farnon was widely regarded as one of the world’s greatest composers of Light Orchestral music during the second half of the twentieth century. He was also revered as an arranger of quality popular songs, having influenced most of the top writers on both sides of the Atlantic. A great lover of jazz, two of his closest friends were trumpeter Dizzy Gillespie and pianist Oscar Peterson.

Robert Joseph Farnon was born on 24 July 1917, and while still in his teens, he became a household name through his many programmes on radio, especially the long-running "Happy Gang". He occupied the lead trumpet chair in Percy Faith’s Canadian Broadcasting Corporation’s Orchestra, also contributing vocal arrangements for the show. In 1940 Faith decided to leave for greener pastures in the USA, and Farnon was invited to take over the baton. World War 2 eventually interrupted his promising career, which had included the composition of two symphonies by the age of 25. It was as conductor of the Canadian Band of the Allied Expeditionary Forces that Farnon arrived in England in September 1944, working alongside Glenn Miller and George Melachrino, who fronted the American and British bands.

At the end of the war Farnon took his discharge in Britain, finding the musical scene more suited to his talents, so that he could work in films, radio and the recording industry. He realised that he had a talent for Light Music, but he did not confine himself to it. After all, he had been brought up in an atmosphere of big bands and show music. While living in Toronto he made frequent visits to New York, where he would call in at Minton’s, generally regarded as the birthplace of "bebop". It was not rare for him to be asked to join a jam session, with the likes of Dizzy and Oscar.

Farnon’s inventive ideas were soon noticed by British bandleaders Lew Stone, Ambrose and Ted Heath who were not slow to add Farnon scores to their libraries. Farnon joined the Geraldo Organisation as an arranger, and when Geraldo travelled to the USA in 1947 for a while Farnon took over the band for its broadcasts and recordings.

The Robert Farnon Orchestra began to appear regularly on BBC radio and television, both in its own programmes and also supporting big British stars such as Vera Lynn and Gracie Fields. Thanks to his radio broadcasts, British listeners were starting to notice the bright, fresh Farnon sound, and towards the end of 1948 Decca released one of the finest Light Music 78s ever recorded - "Jumping Bean" coupled with "Portrait Of A Flirt". These two Farnon originals have become part of the folk lore of British Light Music, and they undoubtedly influenced a generation of composers in this genre.

His first important film score was for "Spring In Park Lane" (1948), and it was hardly surprising when Warner Bros commissioned him to write the score for their prestigious maritime saga "Captain Horatio Hornblower R.N." (1951). The stars were Gregory Peck and Virginia Mayo, and Farnon’s score reflected the attraction they both felt for each other, as well as the many dramatic swashbuckling scenes throughout the film. The title music is the final track on this CD.

In 1962 cinema audiences saw the last film in the famous ‘Road’ series which had begun in Singapore way back in 1940. Bing Crosby, Bob Hope and Dorothy Lamour were reunited for "The Road To Hong Kong" which was filmed at Shepperton Studios in England with Farnon as musical director. Some other major film scores included "Maytime In Mayfair" (1949), "Gentlemen Marry Brunettes" (1955), "The Sheriff of Fractured Jaw" (1958), "Shalako" (1968) and "Bear Island" (1979).

Although it has to be said that he never received the promotional support he deserved from his record company, his contract with Decca produced many fine albums which became models of orchestration. Leading international recording artists engaged him to arrange and conduct for them, such as Frank Sinatra, Sarah Vaughan, Tony Bennett, Lena Horne and George Shearing. Farnon’s work has often been recognised by his peers. In Britain the foremost long-running recognition for excellence in the music industry are the Ivor Novello Awards. Farnon’s tally: "Westminster Waltz" in 1956; "Sea Shore" 1960; "Colditz March" 1973; and the major citation "Outstanding Services to British Music" in 1991. Across the Atlantic Farnon received Grammy nominations for arrangements in 1976 for "Sentimental Journey" (on a Singers Unlimited album) and in 1992 "Lush Life" (sung by Eileen Farrell). He finally reached the top for Best Instrumental Arrangement of 1995 - "Lament" on the J.J. Johnson album "Tangence". His importance was finally acknowledged by his homeland when he was awarded the Order of Canada early in 1998.

Robert Farnon lived on the beautiful island of Guernsey in the English Channel for almost half a century. He was still actively working on new composing and arranging projects right up until the time when he passed away peacefully on 23 April 2005, just three weeks before the premiere of his third symphony in Edinburgh.

The following compositions by Robert Farnon are a few of the fifty to be found on previous Guild CDs: