Cd Review – The Best Of 'Make Way For Music'

Written by Tony Clayden. Posted in Releases up to December 2021 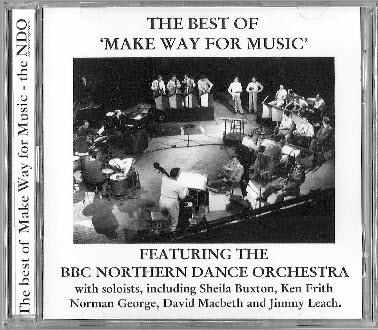 Readers may recall that, a while ago, I wrote a review of a 2-CD set issued by The NDO Project, which included a short history of the latter, and featured the BBC Midland Light and Midland Radio Orchestras.

I have recently received another set – The Best Of 'Make Way For Music' – from Ian Reed, who founded the Project. He has now produced a total of thirteen CDs featuring several different BBC 'house' orchestras, although mainly concentrating on the Manchester-based Northern Variety Orchestra, and its successors, the Northern Dance Orchestra and the Northern Radio Orchestra. Most of these recordings were made well over fifty – or in a good number of cases sixty – years ago.

Make Way For Music was a long-running series, which showcased the considerable talents and versatility of the musicians of the Northern Dance Orchestra. The show began life in 1956 – when the NDO was formed – as a popular weekly radio programme, under its original conductor, Alyn Ainsworth. A very successful transition to BBC Television was also made in the late 1950s and the NDO came to be rightfully regarded by its many fans as the best 'Big Band' in the UK.

The radio version continued to run until well into the 1960s. In the 1970s, BBC producer Peter Pilbeam, who had worked as a sound supervisor on some of the TV broadcasts, revived MWFM as a series of public concerts for radio. [Peter has been Ian Reed's collaborator since the Project's inception, along with their researcher, the late Rod Cotter, to whom this compilation is dedicated]. These concerts were a great success, and the band performed to full houses for almost all the series, doing what it did best – playing to live audiences.

The show was unique and ground-breaking – it wasn’t just great music on offer, but included plenty of – often somewhat eccentric – announcements and jokes from Roger Moffat, together with his interactions with members of the band and producer Barney Colehan. Sometimes these were 'tongue-in-cheek', sometimes downright rude – but Roger generally managed to 'get away with it', and there were many laughs during the sessions. Apparently, the band was full of comedians, who were not averse to playing practical jokes on each other and sometimes on unsuspecting visiting artistes as well !

In addition to regular vocalists Sheila Buxton and Les Howard, the programme played host to many guests, including the organist Jimmy Leach, the pianist Mrs. Mills, vocalist Ronnie Hilton and many others. Several members of the band were regularly featured as soloists, including Johnny Roadhouse and Roger Fleetwood (saxes), Norman George (violin) and Ken Frith (piano). On occasion, a sub-group would perform as 'The Trad Lads'

Some of the tracks on CD 2 feature the 'Augmented NDO', the orchestra then being supplemented by a sizeable string section made up of professional musicians who regularly played in local symphony orchestras.

Both CDs contain compilations of material drawn from various MWFM broadcasts, digitally remastered and edited together by Ian Reed. They play continuously (i.e. without numbered tracks) so as to simulate two actual shows, complete – of course – with Roger Moffat's announcements, etc.

CD1 contains early recordings conducted by Alyn Ainsworth and guest conductor, George Clouston. It also features a rare chat about the programme between Roger Moffat, Alyn Ainsworth and Bernard Herrmann, the latter being appointed permanent conductor a short time after Ainsworth had stepped down and left the BBC in 1961.

CD 2 contains later recordings, taken from live outside broadcasts and performances in the Playhouse Theatre, Manchester, which was the NDO's regular venue; these were all conducted by Bernard Herrmann.

From the beginning, the NDO employed the services of some very talented arrangers, who regularly contributed to what must have been a sizeable library of numbers for the orchestra to perform, which it did most admirably.

Listening to these wonderfully-restored recordings, it seemed as if one was being transported back via the proverbial 'time machine', to an era when quality live music was a staple fare of BBC Radio almost seven days a week.

This CD set deserves to be in every enthusiast's collection. Along with a number of other previous issues, it may be obtained only from The NDO Project.