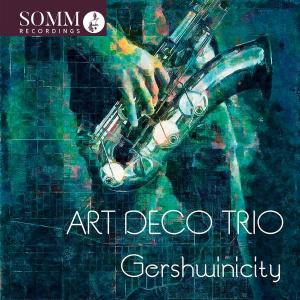 This is an entertaining release of 19 songs by the foremost ‘cross-over’ composer, the great George Gershwin, arranged for clarinet, saxophone and piano, which (to quote the well-informed booklet notes) “combine jazz influences with the structures and textures of classical music”, and well worth investigating by light music lovers.

The man behind the disc is pianist and arranger Iain Farrington, who played the piano at the opening ceremony of the London 2012 Olympics with Rowan Atkinson, the LSO and Sir Simon Rattle – watched by a global audience of around a billion. He also made the organ arrangement of Elgar’s Pomp and Circumstance March No.5 performed at the Royal Wedding in 2011.

The clarinettist is Peter Sparks, co-principal clarinet at English National Opera, also a recording session musician (e.g., ‘The Crown’). The third member of the Trio is Kyle Horch, the lead saxophonist (alto and soprano) in the evocative Michael Law’s Piccadilly Dance Orchestra among many other musical activities including CD recordings.

The title track is a fantasy based on five Gershwin songs – Let’s call the whole thing off, A foggy day in London town, Fascinating rhythm, Embraceable you, Lady be good – first heard in 2018 at the BBC Proms. Other tracks include I got rhythm, They all laughed, Nice work if you can get it, They can’t take that away from me, Fidgety feet, I’ll build a stairway to Paradise, Do it again (does anyone remember Marilyn Monroe’s erotic rendering?), But not for me and a couple of numbers from ‘Porgy and Bess’. All are first recordings and our friends at Somm are to be congratulated on making them available. They were recorded at The Menuhin Hall, Stoke d’Abernon, Surrey, on September 4-5, 2020, produced by Siva Oke and engineered by Paul Arden-Taylor.

I enjoyed this album from start to finish, reminding me somewhat of similar discs by André Previn and friends back in the day. So unreservedly recommended, and I reckon it would meet with Gershwin’s own approval.

That George Gershwin was arguably one of the greatest Popular Music composers of the 20s and 30s is completely beyond dispute. Moreover, he was almost certainly the first to become a 'crossover composer', effortlessly straddling the divide between the popular and light-classical genres, with more than just a bit of jazz 'thrown-in' for good measure. In this respect he paved the way for André Previn, Leonard Bernstein and others – including, I would suggest, Robert Farnon.

Many of Gershwin's works have been the subject of numerous arrangements, both vocal and instrumental, over the years. However, this is the first time that they have been recorded employing this particular – not to say unusual – line-up, viz. piano, clarinet and soprano/alto saxophones.

Of the fifteen tracks, six are performed by all three instrumentalists. I was particularly struck by the way in which the clarinet and saxophone blended so beautifully together, e.g. in I Got Rhythm and They All Laughed. A couple of titles are performed solo by Iain Farrington, the Trio's pianist, arranger and – I suspect – 'prime mover' of the enterprise. The remaining seven are performed by either clarinet or saxophone – of either variety – accompanied by the piano.

I would like to single-out for comment Farrington's 'take' on Summertime – a song which is a special favourite of mine. This is a really stunning arrangement and for me is one of the highlights of the whole programme.

I totally concur with Peter Burt's comments above, and I’m delighted to give this new CD my unequivocal recommendation.

Footnote: It is saddening to have to record the death of my friend Rodney Greenberg at the end of 2020, after a protracted illness. Readers may recall the talk he gave on George Gershwin to the Robert Farnon Society around the time of the new Millennium. There have been innumerable books written about Gershwin, but Rodney’s has come to be regarded by many as the definitive work on a subject which was palpably close to his heart. Its second edition is – I believe – still in print, published by Phaidon Books.