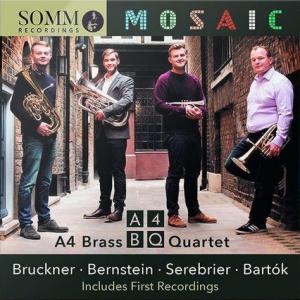 'Here is another slightly left-field release of the kind that makes this label so fascinating. It will definitely be of interest to lovers of brass bands and, indeed, anyone who favours instruments being blown rather than bowed. So, we have the principals from four of the UK's top bands, including Black Dyke, Foden's, and Brighouse & Rastrick … don’t know why the fourth gets no mention.

For their Somm debut the A4 Brass Quartet have chosen an exciting programme mix of the familiar – Overture to 'Candide', Autumn Leaves, Molly on the Shore, Salut d’Amour, Bartok's popular Six Romanian Folk Dances – with the less well-known.

The opening work, Cuarteto, originally written as a saxophone quartet and specially revised for this disc, is by José Serebrier (born 1938). He is also among the most recorded conductors of his time, and it would be no surprise if many readers have at least one of his albums (this label has four) in their collection.

Popular at the group's concerts, Tsuna'ngari (Connection) was written by award-winner Kentaro Saro in tribute to victims of Japan's 2011 earthquake and tsunami. This lovely reflective piece could become the album’s earworm.

Another favourite, Locus iste, was composed by the 19th century Austrian composer, Anton Bruckner, to celebrate the dedication of the votive chapel at Linz Cathedral, where he had been organist. The helpful commendably clearly printed liner notes inform us that due to the nature of the quartet's instrumentation, choral works translate across very easily.

Four more of the dozen works are receiving a first recording: Toccata 2 by Jonathan Bates (b.1995), three of the 5 Miniatures by Christian Overhead (b.1989), competition-winning The Black Dahlia by Daniel Hall (b.1996) – inspired by a truly gruesome happening – and Street Songs by Bramwell Tovey (b.1953), who is Principal Conductor of the wonderful BBC Concert Orchestra. The inspiration here was from seeing photographs of early open-air Salvation Army bands with their random combination of instruments. Mirabile dictu, there are tunes among these 28 minutes of contemporary music.

Responsible for what is an extremely entertaining album, the members of A4BQ, formed in 2013, are Jamie Smith on cornet/flugelhorn, composer and arranger Jonathan Bates on tenor horn, Mike Cavanagh on baritone horn and Chris Robertson on euphonium, as well as arranger of the Bartok and Bruckner.

At the time of writing, the disc is available direct from Somm at a special price of £8.80, plus £3 postage, and the download for £4.80. Other record outlets are available.