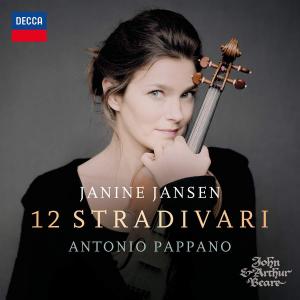 This is one extraordinarily exciting release. Although there is only a single piece of pure light music – Jerome Kern's Yesterdays, arranged by Fritz Kreisler – it should be of fascinating interest to all lovers of the violin. The album consists of 15 tracks played on a dozen different instruments made by the master Cremonan luthier* Antonio Stradivari during the 17th and 18th centuries. These instruments come from around the world and total 3000 years in age with a value of at least £200 million. Jansen plays her normal Shumsky-Rode Stradivarius from 1715 on the above track.

The individual characteristics of each are well captured by one of the great violinists of our time, the Dutch born (1978) Janine Jansen, who has sold 850,000 units for Decca and achieved over 100 million streams. The conductor Paavo Järvi has said of her, "She plays like she is. She's a person of genuine warmth, genuine feeling, genuine expression."

A carefully curated collection of works by Elgar, de Falla, Heuberger, Kreisler, Rachmaninov, Ravel, Clara Schumann, Robert Schumann, Suk, Szymanowski, Tchaikovsky and Vieuxtemps are all short, with only two a tad over six minutes. Tunes like Danse Espagnole, Midnight Bells, Syncopation and Liebesleid, will be recognised by many.

Made in London's Cadogan Hall, the meticulously planned tightly time-limited recording was nearly scuppered when Jansen caught Covid-19. That she was still recovering while completing the disc makes the finished product all the more admirable.

This unique recording is thought to be one of the most expensive ever made … imagine the instrument transportation insurance costs alone! Fiddle fans will be able to add an historic album to their shelves or on their computers.

* a maker of stringed instruments