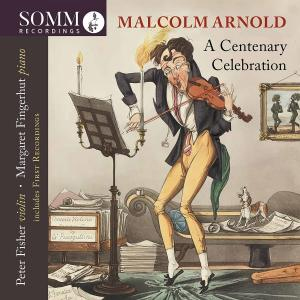 Malcolm Arnold was Northampton born in October 1921 and died in September 2006. His music was once described by Sunday Times critic Paul Driver as "fecund, fastidious, witty, touching, melodious, sardonic, profound". Driver also opined that Arnold was "a many-faceted composer … too often neglected", and your reviewer must admit to having let this autumn release pass him by.

Most of us will have orchestral versions of his Four Scottish Dances and Five English Dances in our collections and they sound equally attractive played by Fisher and Fingerhut, two instrumentalists previously very highly praised by The Times and Gramophone respectively.

Other faces of Arnold including the above recorded here for the first time are a third dance arrangement: Sarabande from his ballet 'Solitaire'; film excerpts from 'Hobson’s Choice', 'Trapeze' and 'The Chalk Garden'; and Thème pour mon Amis, a piece written for whistler and piano. All are arranged by the chairman of the Malcolm Arnold Society, Alan Poulton.

Completing the 23 fine sounding tracks are what the afore-named in his admirable liner notes calls "Three Serious Pieces": Sonatas for Violin and Piano Nos. 1 & 2 and Five Pieces for Violin and Piano. The final movement of this last work written for Yehudi Menuhin was dedicated to the saxophonist Charlie Parker. In 1972 Arnold donated his autograph score to Oxfam.

For the second time recently SOMM must be commended for their choice of booklet cover. The print, hung in the composer's study for many years, is by Henry Pyall and called 'Private Passions' or 'A Solo at Home'.

This release – recorded at Henry Wood Hall, London during lockdown in November and December 2020 – is a fascinating varied selection affectionately performed, and definitely worth investigating.