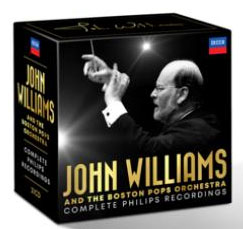 This box set is released to celebrate the 90th birthday of the conductor. It consists of the 22 albums recorded by him for Philips during the first ten years of his tenure as the orchestra's principal conductor from 1980 to 1993.

The Boston Pops, founded in 1885, is more or less the Boston Symphony Orchestra usually without some of the front desk players. It focusses on light classical and popular music and has been described as "the perfect orchestra for people who don't know they like orchestras!"

The first disc is devoted to marches and so maintains a speciality of Williams's predecessor, the renowned long serving Arthur Fiedler. The last album, a combination of 'By Request' (all-Williams compositions) and 'Pops Britannia', ends with the BPO and Bay State Pipes and Drums playing Scotland the Brave – one of the set's many standout tracks.

In between these two there are albums of film scores (many of them written by the main man himself) and stage musicals – good to hear Slaughter on Tenth Avenue again; 'We Wish You a Merry Christmas' including a medley of carols by my namesake Alfred Burt; a selection of overtures '‘Pops Around the World', among them The Cowboys (Williams again); Dudley Moore narrating Peter and the Wolf; Tchaikovsky's Nutcracker; big band numbers, the album named after Williams own 'Swing, Swing, Swing'; patriotic anthems ('America, the Dream Goes On'); romantic classical pieces ('Pops in Love'); Holst The Planets with synthesiser (!); 'Pops à la Russe' like Sabre Dance; easy-listening like a long unheard favourite of mine, Unchained Melody, on 'Digital Jukebox'; and tributes to Bernstein and Gershwin, with Mischa Dichter the soloist on the latter's Piano Concerto.

The magnificent operatic soprano voice of Jessye Norman (1945-2019) is featured on two other albums: the first from the Great American Songbook involving the whole orchestra and the second, Lucky To Be Me, accompanied solely by John Williams as pianist. What a consummately gifted music man.

Richard Hayman's many arrangements are joined among others by those of Leroy Anderson, Robert Russell Bennett, Dick Hyman, Billy May, Angela Morley, Glenn Osser, Conrad Salinger and John Williams.

Decca are to be commended for curating this significant set, which I found at their online Store for £49.99 – that's an incredible £2.38 per album.

John, thank you for the music and many happy returns!