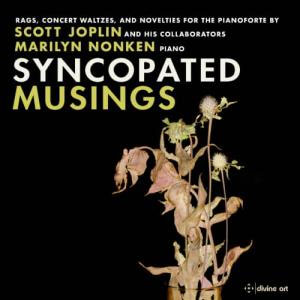 With this album made at New York University in April 2021 we very much get what it clearly says on the tin. Ragtime developed as a popular musical style at the end of the 19th Century. It has its origins in the saloon bars and dance halls of African-American communities.

It was originally played, as here, on solo piano. I understand that the left hand plays a very steady rhythm – a vamp style accompaniment which is on the beat. The right hand plays a syncopated melody – initially known as a 'ragged' rhythm. It is definitely melodic.

Scott Joplin (c. 1868-1917) is the best-known ragtime writer and described himself as "King" of the genre, but did not claim to be a great pianist. He was one of the first black American composers to achieve fame and fortune. Nine of the tracks here are solely by him, including Magnetic Rag, Binks’ Waltz, Bethena – A Concert Waltz, Solace – A Mexican Serenade, Antoinette – March and Two Step, and Reflection Rag.

Neither of Joplin's most famous compositions, Maple Leaf Rag and The Entertainer, are included and I would like to have heard Marilyn Nonken's take on these, although that has not stopped me enjoying this album largely of works that are not on any other of the composer's discs in my collection.

The soloist is Professor of Music at New York University's Steinhardt School and has been described in the 'American Record Guide' as "one of the greatest interpreters of new music", having 30 discs to her credit, together with being passionate about the music of "The King of Ragtime" and his collaborators.