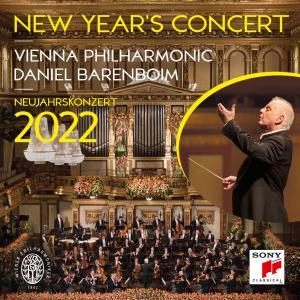 Unlike this annual world-renowned concert in 2021 that due to Covid restrictions was performed to an empty Musicverein in Vienna, this year there was a reduced sized mask-wearing audience.

Wielding the baton for the third time (also in 2009 and 2015) was the eminent maestro Daniel Barenboim – invited again this year in celebration of his 80th birthday in November – although occasionally he just stood and listened. This orchestra after all could probably play the music of the Strauss family et al blindfolded. On reflection, they might have difficulty with six of the 18 musical tracks which are new to the concert repertoire.

One particularly interesting choice is Nachtschwarmer, Waltzer by Carl Michael Ziehrer, where the orchestra not only play superbly but also sing (less superbly) and whistle. Johann Strauss ll is responsible for eight pieces played – including one of my favourites, Morgenblätter – and the remainder come from Josef (4), Eduard (2), Johann l (1) and Joseph Hellmesburger (2). The latter is reckoned as coming closer than anyone else to challenging the dominance of Johann ll and Josef.

As well as the 2-CD issue, the concert is also available on DVD Video, Blue-ray, Vinyl and as a download. A pound to a penny it will be one of the highlights of listening this year… and beyond.