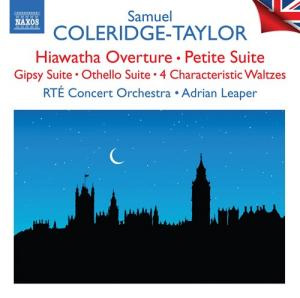 The latest re-issue in the [now Naxos] British Light Music series is the collection, previously available on the Marco Polo label [8.223516, (p) 1995 ], of works by Samuel Coleridge Taylor.

Coleridge Taylor was a brilliant student the Royal College of Music in London, where he was taught by Sir Charles Villiers Stanford, who held him in very high regard. The comprehensive booklet notes are the work of the late and much-missed David Ades.

For those who did not purchase this CD when it originally appeared, this is a welcome opportunity to acquire some good- quality Light Music at the rather more 'serious' end of the spectrum.

Samuel Coleridge-Taylor was born in 1875, the son of a doctor from Sierra Leone and an English mother, and sadly died of pneumonia only 37 years later. He became popular not just for tuneful orchestral works but also choral and vocal music. He was championed by Elgar and influenced by Dvorak, his musical idol. Despite his success he was constantly in financial difficulties.

It was the first part of his 'Hiawatha' trilogy of cantatas that established his reputation, but I agree with Tony that today it is his Petite Suite we think of first.

For me, the album was an ideal Sunday afternoon listen with the more I heard the more I enjoyed it. Four Waltzes ranges from the Bohemian to the Moorish, Romance is a delightful piece and I especially liked the two suites.

The 'Gipsy Suite' is a bright four-movement work: Lament and Tambourine, A Gipsy Dance, A Gipsy Song and Waltz; the 'Otello Suite' starts with an energetic dance, has a Children's Intermezzo, an appealing Willow Song and ends with a rousing Military March.

Both the performance and the recording are of a high standard, and the total playing time is a fairly generous 71'11".