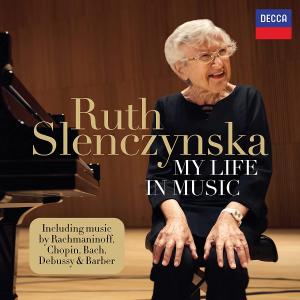 This is a remarkable release made in 2021 by a pianist – who has been playing since she was aged four – in her 97th year. Born in Sacramento, California, to Polish immigrants, she performed on television at age five, and at six made her European concert debut in Berlin. 91 years since then she is still performing to audiences around the world as well as having played for several Presidents of the USA. She first recorded for Decca in the 1950s and 60s.

The album is inspired by her personal connections with the great composer-pianist Sergei Rachmaninov. She is his last-living pupil and even once stepped in for him. She was also a fellow student and friend of Samuel Barber. The two composers share the first four of the 11 tracks.

There are pieces that will be familiar to many readers, such as Chopin's Grande valse brilliante and Étude in E (the basis for the multi-recorded song So Deep is the Night), Grieg's Wedding Day at Troldhaugen and Debussy's The Girl with the Flaxen Hair.

Slenczynska became a celebrated Chopin interpreter and there are three more of his works here. All her choices are tuneful, with Bach's Prelude & Fugue in C sharp closing the selection.

Lovely music delightfully played and the booklet has some lovely photographs of the pianist. I reckon this is an album to treasure.