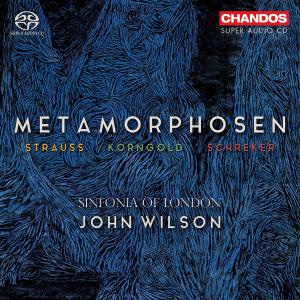 If strings are your thing, then this release will appeal to you. Supposedly it is a follow-up to the highly praised 'English Music for Strings', reviewed in 2021.

Richard Strauss (1864-1949) came under a big cloud for his association with the Nazis during WWII – although he never became a party member. When the Munich opera house was destroyed by bombing in 1943, he sketched a few bars of "mourning for Munich" and took these up again when he began composing Metamorphosen (Study for Twenty-three Solo Strings) in March 1945. It is reckoned to be the finest of his later works with masterly writing for strings.

The Austrian, Franz Schreker (1878-1934), is a name previously unknown to your reviewer. It seems he was primarily a composer of operas. His six-minute Intermezzo, Op.8 (for String Orchestra) was completed in 1900 and incorporated in his '‘Romantische Suite' three years later. It is quite a pleasant piece deserving repeated hearings.

Erich Wolfgang Korngold (1897-1957) will be well-known to most of our readership, many of whom already having some of his music played by John Wilson and his brilliant band on Chandos in their collection. His Symphonische Serenade (Symphonic Serenade for String Orchestra), at a tad under half-an-hour, is the album's longest work … just. It was written during 1947-48 not long before Korngold returned to Vienna from the USA, where he had achieved such great success as a composer of film music. The original orchestral line-up was 16 each first and second violins, 12 each violas and cellos, and eight double-basses.

It, too, is an agreeable listen with the pizzicato playing being particularly enjoyed. Musicians will appreciate Gavin Plumley's erudite programme notes. There is not much doubt that the album will deservedly attract another host of favourable reviews.

Incidentally, 22-year-old Charlie Lovell-Jones is leading the orchestra again as Andrew Haveron – who has held that position since the resurrection of the SoL in 2018 – was in Australia and unfortunately, due to the pandemic, unable to travel for the August 2021 recordings in London.