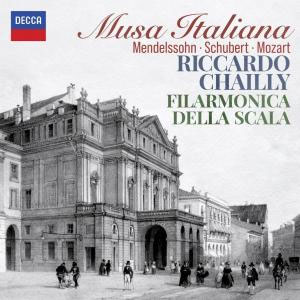 Regular readers will be aware of my enthusiasm for the top Italian conductor and his first-rate pit band, as four of their discs have already been reviewed here. The latest recording, from 2021 – socially distanced with a new floor created over the seats of the Teatro alla Scala's Golden Auditorium stalls to accommodate the opera house orchestra – features Felix Mendelssohn's (1809-47) deservedly popular 'Italian' Symphony (No.4 in A).

It was composed during a 10-month Grand Tour of Italy and in its 30':17" seeks to conjure up the sights and sounds of the country, using in the final movement the rhythms of Neapolitan dances. When it was first performed in 1833 (the revised version here is from a year later) the composer spoke of it as "the jolliest piece I have written." So light music lovers need not be wary of sampling it.

Two other Austro-German composers, for whom the tune's the thing, contribute to an attractive although not over generously timed album.* Like many others in those days, Franz Schubert (1797-1828) – who incidentally was only five foot one tall – greatly admired the works of his Italian contemporary, Gioacchino Rossini (1792-1868), and in 1817 composed a pair of lively overtures that evoke the latter’s world – later to be called 'In the Italian Style'.

The release is completed by three early overtures from the pen of the greatest classical tunesmith of them all, Wolfgang Amadeus Mozart (1756-91), who wrote many of his operas in the Italian language and as a very young man lived in the country for 15 months. They are from operas premiered in Milan from 1770 to 1772: 'Mitridate, re di Pronto'; 'Ascanio in Alba' and 'Lucio Silla'. The composer returned for the second and third of these occasions.

It seems apposite here in these times of great despair about what is happening around the world to quote Lady Antonia Fraser from the June 2022 copy of Gramophone: "Mozart gives me hope …. a sense of cheerfulness".

Italy (officially the Italian Republic) has some stunning scenery, wonderful architecture, art and antiquities as well as being the birthplace of pasta and pizza. This album attests to it also inspiring quality melodic music making. Altamente raccomandato.