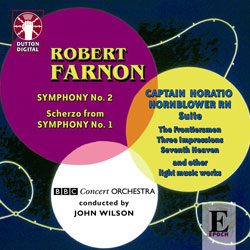 Among devotees of light music, Robert Farnon (1917—2005), born and trained in Canada, is practically a deity - and with good reason. No other Englishman since the era of Eric Coates has left such a deep mark, with his utterly distinctive and widely influential idiom, on the whole field of light music. In addition to his conspicuous role in this area, however, in jazz and popular music Farnon was an arranger whose talents were sought out by many famous stars of the day - Sinatra, Sarah Vaughan, Tony Bennett, George Shearing, J. J. Johnson, Singers Unlimited, even Eileen Farrell. Beyond this, Farnon also made occasional forays into film music, as the first item on this long-awaited dazzler of a disc triumphantly illustrates - the concert suite drawn from his most famous score for the Gregory Peck 1950s costume drama "Captain Horatio Hornblower RN".

This is the third and by far the most impressive recording of this splendiferous music. Its towering main theme is the quintessence of swashbuckling adventure, and the exquisite "Lady Barbara" love theme is one of Farnon’s most enrapturing inspirations. Perhaps some of the action sequences sometimes sound a little too forced or generic, but Farnon’s absolutely brilliant command of orchestral colours sweeps away all reservations.

Like Montague Phillips of an earlier generation, Farnon, although he was already lead trumpeter in a radio orchestra led by Percy Faith, began his precocious career while still in his early twenties as a composer of large-scale concert music with two symphonies premiered to considerable acclaim under conductors Sir Ernest MacMillan and Eugene Ormandy. In point of fact, Farnon never totally turned his back on the "classical" world; among his later more extended works are a gorgeous Rhapsody for violin and orchestra, Prelude and Dance for harmonica and orchestra, Tripartita for saxophone and orchestra, and a piano concertante piece entitled Cascades to the Sea.

This premiere recording of the Second Symphony, subtitled "Ottawa," together with the Scherzo movement from the First (both products of the early 1940s, before he emigrated to England as conductor of a war time army orchestra), will delight all of those who have waited decades to hear these prime examples of the Farnon style in gestation.

At nearly half-an-hour in length, the Second Symphony is quite ambitious, and its three movements (Larghetto con maesta; Allegro moderato; Largo ma non troppo) show that Farnon was not content to abide by traditional rules of tempo and mood, of which there is considerable freedom and contrast here, even within individual movements. Though perhaps a little weak in the strategies of formal development, the proceedings are dominated by Farnon’s innate melodic gift as well as his instinctive feeling for rich orchestral textures. Already his characteristic modes of soaring expansiveness and celebratory affirmation are clearly evident. In fact, the composer would now and then return to these then-withdrawn scores to mine them for ideas for later works, such as the opening of the finale, which became the spellbinding Ottawa Heights of his "Canadian Impressions". The First Symphony Scherzo—meaningfully marked Moderato con licenza - sports a disarmingly memorable tune which could be a harbinger of light classics like Jumping Bean.

The remainder of this program offers a diversified cross section of the kind of orchestral miniatures for which Farnon discovered in the post-war years there was a strong demand in England. This was a field that made best use of his particular talents, and most were originally published by Chappell as utilitarian "production" music, but many eventually became popular outside of this specialized context. Both Alcan Highway and High Street were later incorporated into "Canadian Impressions", while Manhattan Playboy typifies the breezy metropolitan dash of Portrait of a Flirt, and Seventh Heaven the glamorous and rhapsodic ambiance of Journey into Melody and A Star Is Born. Incidentally, In a Calm is one of the most serene and luminous pieces of quiet music ever devised. In works like these, as well as The Frontiersmen, Goodwood Galop, and Playtime, Farnon can immediately evoke a specific mood or activity in just a few short pregnant measures filled with striking and often cleverly unpredictable melodic, harmonic, and rhythmic outlines that stay in the memory in part due to their masterly orchestral embodiments.

John Wilson, the enormously talented young conductor whose interests straddle both the popular and classical fields, conducts absolutely impeccable and idiomatic performances from an ensemble with more than a passing acquaintance with this kind of fare. And Dutton’s sonics leave nothing to be desired.

It is high time the artificial boundaries between pop and classic are breached, and it is this kind of release that moves the process forward. The music of Robert Famon is an excellent place to start. Quality is quality, no matter what the context.

Reproduced from the American magazine "Fanfare" by kind permission of the reviewer.