Last spring (2006) David Ades was approached by the British company Jasmine Records to discuss the possibility of a 2CD collection of Robert Farnon recordings. Rather than repeat the repertoire which has already appeared on other labels, the early discussions centred on recordings that were new to CD. However, at the same time Jasmine naturally wanted to include some of Robert Farnon’s best known works, so that the collection would have a general appeal – especially in North America where Jasmine is a strong seller. Jasmine is gradually building up an impressive catalogue of light music releases, with recent issues featuring Mantovani, Gordon Jenkins and Hugo Winterhalter.

David suggested that the inclusion of some of Robert Farnon’s soundtracks from the 1940s would certainly appeal to his admirers, especially as they have never before been available on commercial recordings. It was also agreed that many of his Decca 78s accompanying popular singers deserved to be restored to the catalogue, and gradually the concept for this new release began to take shape.

David recommended that Alan Bunting should handle the digital sound restoration, and work on the project began in earnest last autumn. Rather than mix the vocals and instrumentals, it was decided that the first CD would concentrate on Bob’s famous numbers, with four longer extracts from film soundtracks. The second CD concentrates on the Decca singles he conducted – many of them featuring his own brilliant arrangements. The result is a collection that provides a snapshot of his formative years in Britain, with plenty of tracks being reissued for the first time in over half a century – thereby making the release of great interest to existing Farnon fans, as well as those who will be discovering his genius for the first time. 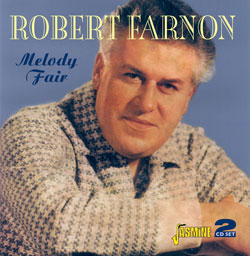 CD 2 Robert Farnon and his Orchestra accompanying singers on UK