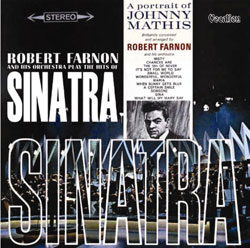 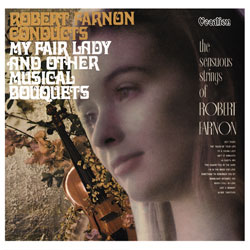 Mike Dutton, of the UK Vocalion label, has been responsible for restoring almost all of Robert Farnon's early recordings to availability in recent years. Farnon fans owe him a deep debt of gratitude for making available once more those glorious 1950s sounds on Decca, but there has been a gap waiting to be filled regarding the 1960s -; until now.

Surprising the copyright owners have shunned the 1960s Philips LPs for decades, despite false hopes being raised on a few occasions. For years it had seemed to RFS members that the pairing of Bob's Sinatra and Mathis collections was a 'natural' for reissue, but it has taken until late 2011 for this to happen. Mike Dutton has now obliged, but he has gone one step further, by reissuing the 'My Fair Lady' and 'Sensuous Strings' albums as well.

Readers will not need reminding that these two CDs contain fine examples of Farnon's mastery of string writing, as well as his instinctive feel for the swing era that played an important part of his upbringing. What stands out today, is that these recordings do not sound dated: they could have been recorded a month or two ago, such is the timeless quality of beautifully crafted music such as this.

A long held appreciation of Farnon's work must have been the main reason why Quincy Jones signed him up to make a series of LPs for US Philips, a division of Mercury Records, also released in Britain by Philips. This produced five outstanding orchestral albums, the first of which was "The Sensuous Strings of Robert Farnon", released in October 1962. As the title suggests, "Sensuous Strings" focuses on Farnon's mastery of string writing, rather than his command of the full forces of a modern concert orchestra.

The sessions took place on 10 and 11 May 1962 at the Cine-Tele Sound (CTS) studios then situated at 49-53 Kensington Gardens Square in Bayswater, London. In some ways Farnon was thumbing his nose at Decca for their failure to fully promote his work while under contract with them, because these were new stereo recordings of numbers that had previously appeared in mono on various LPs of the 1950s.

In JIM 18 (August 1962) David Ades reported on the final session on the evening of 11 May, which he was able to attend. David wrote: "The first tune played at my visit was Just A Memory and it took well over an hour before everyone was satisfied with the result. The other three tunes -; When I Fall In Love, Hey There and To A Young Lady -; were recorded with very little trouble. Of these, To A Young Lady was the most memorable for me. It was about 9:40 and the session was due to end at 10:00pm. Only the string session and a flautist were left in the studio, and the almost haunting quality of the flute introduction had everyone in the control room amazed. The first 'take' was perfect, but with a few minutes left it was decided to play safe and have another run-through. This second performance turned out to be one of the few occasions when it has been possible to improve upon perfection!"

David also spoke with producer Quincy Jones: "Quincy Jones, A & R Manager for Mercury Records, couldn't hide his enthusiasm for Bob's music. 'I'd like to record fifty albums with him!' he told me." Douglas Gamley was also present, sitting with the balance engineer and closely checking the score to make sure that all the notes were finding their way on to the tapes.

Although the emphasis was on strings, Farnon makes subtle use of occasional woodwinds and brass. It is also good to hear two of his own compositions, the afore-mentioned To A Young Lady (dedicated to his daughter Judith) and La Casita Mia, blending perfectly with the standards making up the rest of the collection. On numerous occasions we hear the sublime violin of Raymond Cohen, for many years Farnon's concertmaster.

In later years Robert Farnon's recording sessions would be regularly reported in Journal Into Melody, but a glance through back issues in the 1960s reveals very little about the other sessions that Bob did for Philips. There were actually five instrumental LPs, the one still awaiting reissue being "Captain From Castile and other Great Movie Themes". This could be paired with the "Shalako" soundtrack, and we have suggested this to Vocalion. Will there be some good news to report about this one day soon?