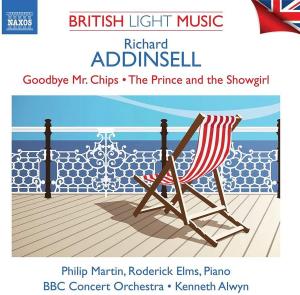 It is good to have this album back in the catalogue. It was originally released on the Marco Polo label in 1994 and appears to be the first in a new series from Naxos of 'British Light Music', which is something to be celebrated.

Richard Addinsell (1904-77) was in his time one of Britain's leading composers for stage and screen, best known for his finest work, Warsaw Concerto, featured in the wartime film "Dangerous Moonlight".

The 13 pieces here, comprising film scores and incidental items, have lots of very likeable melodies and nifty orchestrations. The opening number, the Theme from "Goodbye Mr Chips" – Addinsell's first international film success – has been reconstructed for orchestra by Philip Lane, who has also arranged the Overture from "Tom Brown’s Schooldays", and one other, as well as being music consultant and providing 4 1/3 pages of really informative and very readable booklet notes.

Two of the works, Invitation Waltz and Festival, were written for stage plays; and The Isle of Apples for a cycle of seven radio plays. Philip Martin is the soloist on The Smokey Mountains, an attractive piano concerto with a jolly third movement. The theatre organist, Felton Rapley, had a hand in the initial arrangement of a selection from "The Prince and the Showgirl", the Marilyn Monroe movie co-starring and directed by Laurence Olivier. Journey to Romance was written for a London recorded music library.

A favourite track is the "Fire Over England"- Suite (8:30) with its Elizabethan echoes. One of a duo of arrangements by Douglas Gamley, "A Tale of Two Cities"- Theme, features the piano of Roderick Elms (also heard on Tune in G). The composer's hopes that it might be another Warsaw Concerto were unfortunately not realised.

The BBC Concert Orchestra, to whom this music is meat and drink, are in customary excellent form under the baton of Kenneth Alwyn (born 1925), who was lost to us last December (2020). He was once described as "one of the great British musical directors" and is remembered as conductor of the LSO on Decca's first stereo recording, Tchaikovsky's 1812 Overture.

There is no need for a reviewer to try and "sell" this good sounding album – recorded in Golders Green Hippodrome – to our readers. With so few of its kind being made these days, if you missed it first time around you will likely want to snap it up now. It is widely available online including from Naxos Direct for only £6.50 postage free.

One wonders who or what will be the subject of the next release in this series. Let's hope Naxos does not keep us waiting too long.

Comment by Tony Clayden: I think it is relevant to point-out that whilst the 'Warsaw Concerto' is credited to Richard Addinsell and, as Peter states, is considered to be 'his finest work', most of this piece [some experts say all of it ] was actually the work of Roy Douglas, who acted as 'ghost writer' for Addinsell. Douglas never received appropriate recognition – nor indeed commensurate financial reward – for his labours, notwithstanding that Addinsell amassed very considerable wealth – over many years – from the composition. It should also be mentioned that in the case of most of the other pieces contained on this CD, Addinsell required [frequently considerable] assistance from several composer / arrangers, in order to bring his ideas to performable fruition.