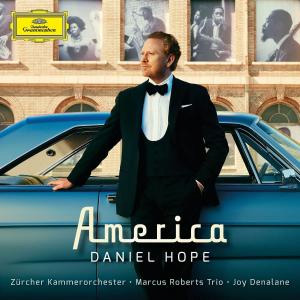 A Daniel Hope album, 'Journey Into Mozart', was reviewed here back in 2018 and since then the South African virtuoso violinist of Irish and German Jewish descent (b.1973) has made several other imaginatively conceived discs. This latest one is very much in the territory of light music.

It opens with a 28 minute 'George Gershwin Suite': a selection of five well-loved numbers in which Hope is accompanied by the jazz trio of renowned American pianist Marcus Roberts, Rodney Jordan on bass and Jason Marsalis on drums, as well as his Zürcher Kammerorchester (Zurich Chamber Orchestra), of which he has been Music Director since 2016. Later there is a 2019 Paul Bateman arranged 'West Side Story' – accepted by the Bernstein Estate – sans brass and percussion that, also unusually, includes A Boy Like That and I Have a Love.

As well as the fine playing of Hope, his band and guests, this release's other attraction are the fresh arrangements of everything (apart from the 'Rodeo' piece) by Paul Bateman (b.1954), whose talents include conducting two score of film music recordings with the City of Prague Philharmonic Orchestra for Silva Screen Records, and composing hymn tunes and other Church music.

A pleasant nicely judged compilation demonstrating the diversity of music from across The Pond, well worth acquiring.