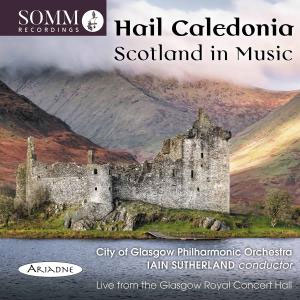 SOMM welcomes the new year with another dip into the Iain Sutherland sporran of spirited sounds – this time from his Scottish homeland with a fresh remastering by the admirable Paul Arden-Taylor of live radio transmissions taken from 'Pops at the Philharmonic' concerts at Glasgow Royal Concert Hall in 1995-96.

Three Scottish Castles (Stirling: Gateway to the Highlands, Dunvegan, Isle of Skye and Edinburgh, Princes Street) is by Iain himself. Other pieces come from Eric Coates, Felix Mendelssohn, and Granville Bantock. It is a pity that Robert Farnon's From the Highlands, which is on the original 'Great Scottish Classics' album, has been replaced.

Iain was invited to form the City of Glasgow Philharmonic Orchestra in 1988, in preparation for Glasgow City of Culture 1990, and conducted them for seven years.
The album is enhanced – thoughts of Covid almost caused me to write 'boosted' – by some top-notch booklet notes from Robert Matthew-Walker; and Kilchurn Castle, Loch Awe provides an impressive cover photograph.

Altogether, then, one more very collectable album from this label, with the 1936-vintage Maestro in customary fine form as conductor, arranger and composer.