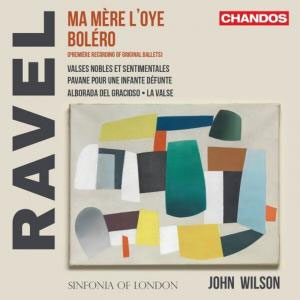 Due to the wretched pandemic, we have had to wait some time for a new album from our friend John Wilson and his celebrated orchestra. Now following their Dutilleux disc it is here, devoted to the music of a much better-known French composer, Joseph Maurice Ravel (1875-1937). It has been said of him that he wrote very little music that was second-rate, be it orchestral, piano, ballet, chamber, opera, or song. He also enjoyed the jazz he heard in the 1920s New Orleans and it influenced some of his later works.

Maurice Ravel placed high importance on melody, telling his pupil Ralph Vaughan Williams that there is "an implied melodic outline in all vital music". He was also a renowned orchestrator, sometimes of other composers' output, with Mussorgsky's Pictures at an Exhibition being the best example.

La Valse (the completion of which was delayed by Ravel's service as an ambulance driver during World War 1) starts quietly but builds up to a sonically brilliant finish over its 11½ minutes. The hauntingly elegiac Pavane Pour une Infante Défunte (for Small Orchestra), written in 1899, established his reputation by achieving world success. The ballet music for Ma Mère L’Oye (Mother Goose), the longest work here (27:58), began life as some pieces for piano duet written for two children. This edition is a première recording. The very Spanish Alborada del Gracioso, and the very Gallic Valses Nobles et Sentimentales, later orchestrated for a ballet, were also originally written for solo piano.

His best-known piece – kept until last – is the exciting Boléro, thanks to the ice-skaters, Jayne Torvill and Christopher Dean, who used it to accompany their gold medal winning perfect-six dance at the 1986 Olympics. We learn from Hugh Macdonald's booklet notes that it was originally entitled 'Fandango'. John has carefully reinstated details of the score which had become carelessly lost so it, too, is a première recording. The story goes that Ravel once remarked about this work that he had produced only one masterpiece and that it contained no music!

Seemingly good for a quotable quote, he once stated, "The only love affair I have ever had was with music". And when Gershwin asked for lessons in composition, Ravel is said to have replied: "It is I who should be asking you how to make so much money by writing music".

Given the pedigree of the conductor and orchestra, those who are familiar with the composer will need no reassurance about adding this latest issue to their collection. Others can sample it on the excellent Chandos website. I notice that Andrew Haveron, the usual SoL leader, only plays on Pavane with Charlie Lovell-Jones filling the role on all the other works.

I believe this to be the longest album I have had the pleasure of reviewing. Let us hope it will be the benchmark for more releases throughout the year.